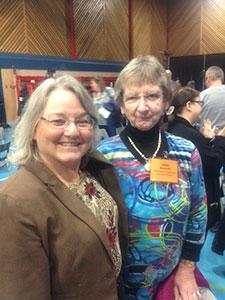 There was a buzz of excitement at Yukon College in late April that I’m not sure we’ve heard before in the adult education world up north.

Innovative, transformational, successful – these were all words I heard repeatedly when I was lucky enough to attend the tri-territorial symposium on adult education in Whitehorse, Yukon.  And I’m proud to say that the NWT Literacy Council was a part of some of those innovative initiatives.

There were also numerous workshops of best practices and success stories from all three territories. Culture and language; short courses; make-up courses for people who had almost graduated; blended learning. These were all featured, including the two short embedded literacy and essential skills courses that our own Lisa Campbell and Pat Salt developed for Aurora College.

We recently coordinated and evaluated the pilot testing of the Intro to Office Admin. course. The success was palpable: 100% completion in one community; an average of 70% completion overall; participants who got full time jobs, part time jobs and/ or registered in further training.

A highlight of the three days was our magnificent road trip to Haines Junction, where we feasted and were entertained by young dancers.  I commend the Yukon College Culinary Arts students who provided ALL the food!  It was wonderful!

On the last day, each territory took part in a caucus meeting to discuss what participants had learned, and what they thought were some priorities for the future.  This input will go to the college in each territory. 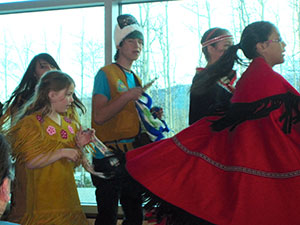 The symposium was funded as part of the $27 million Northern Adult Basic Education (NABE) funding from the federal government, administered through the Canadian Northern Economic Development Agency or CanNor.

This was a first time all the adult educators from the three territories had an opportunity to get together, meet each other and share stories. It was exciting and motivating.  Let’s hope it’s not the last event like this.