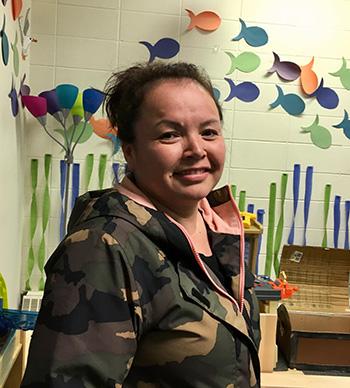 He describes the diploma program as “innovative and experiential.” The program has an element of self-development and is unique in Canada for its focus on meeting the needs of Indigenous communities.

“It’s hands-on and more practical, therefore more enjoyable. For instance, we can teach how programs are built for children, but then the students themselves develop early childhood programming that promotes Indigenous language and culture. They can use this programming once they are on the job,” notes Jim. Since 85 percent of the diploma program students are Indigenous, they are the experts on the subject matter, says Jim.

Gloria Neyelle Gaudet has long wanted to open a day home or work at the preschool in her hometown of Délı̨ne. The early childhood program at Aurora College in Yellowknife will help her make that dream a reality.

The mother of two children had a background in recreation before moving to Fort Smith to take business administration. When she heard that the early childhood program was starting up in Yellowknife, it was an easy decision to move again last fall.

“I did early childhood courses before online but it was hard to learn that way,” Gloria says. “I missed the personal interaction with students and instructors.”

The Early Learning and Childcare Diploma students are placed with organizations and centres around Yellowknife to get practical experience for two to six weeks at a time. For example, Gloria recently completed a field placement at the Aboriginal Headstart Program in Ndilo.

This is the first year Aurora College has offered the Early Learning and Childcare Diploma Program in Yellowknife, though early childhood training has been available by distance education for almost 20 years. It took students a long time to graduate using the distance model, notes Jim.

In 2015, the college started experimenting with an in-person certificate program in Inuvik. Most of the nine graduates returned to take their diploma the next year.

Diploma graduates can work in preschool early childhood settings and in Junior Kindergarten classes in NWT schools. The next program starting in September has attracted interest from 45 prospective students.