Indspire Laureates Inspire Others on to Post-Secondary Education 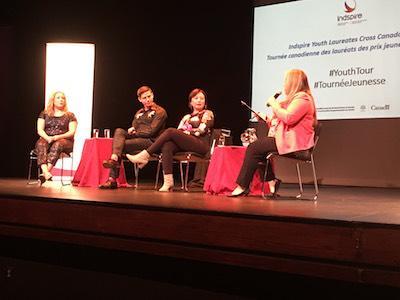 The Indspire Youth Laureates Cross Canada Tour made a stop in Yellowknife Tuesday, with three laureates sharing their inspirational stories of post-secondary education. These speakers are taking different educational paths, but had common struggles. They shared tips for success with Indigenous students.

Thomas Dymond is a laureate from the Bear River First Nation in Nova Scotia. He was a strong leader for Indigenous students while completing his undergraduate and Master’s degrees at Memorial University of Newfoundland. He is now a medical student at Queen’s University, where he promotes greater representation of Indigenous students in the Medical Faculty. He highlighted his many struggles to get where he is, and the groups that have helped him to get there, including Indspire.

An audience member asked why there was this underrepresentation in medical school. Thomas pointed out that, at least at the time he heard the statistic; an Indigenous male was more likely to go to jail in Canada than to complete high school. With such low rates of high school completion, how are Indigenous males to be well represented in undergraduate programs, let alone medical schools? This was a great reminder that our support to community groups to help youth develop their skills or return to school can have a big impact on the future of our territory.

All three speakers credited university on-campus Indigenous student resources as being crucial to their success. Each left their home community and traveled far to attend post-secondary school. They said connecting with other Indigenous students was very important to them, as well as connections with local Indigenous people. This helped them feel connected to their own culture. In Elizabeth Zarpa’s case, connecting with local Indigenous people in Victoria, B.C. helped her feel connected to her Inuit culture far away in Labrador.

High school students may believe that Student Financial Assistance or Indigenous government programs will be enough financial help to get them through post-secondary school. But the Indspire laureates said that is not always the case. Situations come up while a student is in school that cost money, and could harm their ability to complete their studies. They pointed to Indspire as a great resource for both financial and non-financial support.

Congratulations to the Literacy Council’s own Danita Frost-Arey, a 2017-18 Indspire scholarship winner.  When Danita isn’t working at the Literacy Council, she is an Aurora College social work student. I hope the student audience from Deh Gah School, in Fort Providence, and Kalemi Dene School, in Ndılǫ, were inspired this week to pursue post-secondary goals as well.