Learning the Local Language: Reflections from a Year in New Zealand 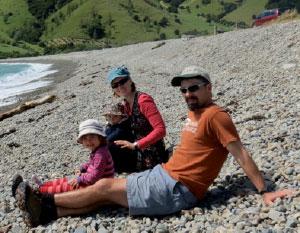 The Wiiliideh language word for “white person” is “kwedone,” which literally means “rock person.  This comes from one of the first experiences that the Yellowknives Dene had with prospectors who came North in search of gold.

This one phrase describes an historical situation and perception unique to this place.  This is the case with many other Wiiliideh words that describe places and cultural practices.  As with any language, the meaning behind the words, and the particular ways of saying things reflect a way of thinking that conveys the history and the cultural knowledge that we can only understand by learning the language.

Last year, the Holroyd-Moloney family (Peggy, Hugh and kids, Jasmine and Rowan) lived and traveled in New Zealand, where we had the opportunity to reflect on the importance of language to culture.  Hugh taught at Buller High School in a small town on the west coast of the South Island.  Peggy took two language classes in Maori and through the school we had access to some amazing cultural experiences.

Our family was offered the opportunity to participate in a high school trip to a local Marae, a Maori tribal meeting place.  This was a special opportunity because not many non-Maori get this opportunity.  After an entrance ceremony, with voice and facial intimidation rituals, we were welcomed into their sacred meeting-house as part of the community or ‘tangata whenua’ (‘people of the land.’)

Upon entering, an introduction ceremony takes place.  A person’s introduction is known as their ‘pepeha,’ which describes the mountain and lake that they are associated with, and their parents’ names.  Peggy, with her new language skills was able to introduce herself in Maori.  Our hosts were highly impressed and it set the tone for a very rewarding three days of cultural interaction, fun and respect.

The Maori language was everywhere in New Zealand.  A majority of the place names are Maori, schools are mandated to teach Maori and it is commonplace to read Maori words in the local English newspapers.  We were impressed to see how non-Maori people have incorporated Maori words into the local way of speaking.

Where the word community might be used, many people use the Maori word ‘whanau’.  Hugh was driving a group of students home from a field trip one day and a student asked what he had planned for the weekend.  Hugh responded, “I plan to spend the weekend with my whanau”, and this was a satisfactory answer as whanau means your friends, your family and the people in your local geographical community.  This is a beautiful example of how the Maori language is being integrated into contemporary New Zealand.

When we returned to Yellowknife we made it a goal to learn more Wiiliideh and we wanted to develop a better understanding of the local Dene people.  In late September, while immersing ourselves in cultural celebrations in Dettah, Peggy met Mary Rose Sundberg and asked if she would be willing to teach a language class.  She was quite thrilled about the idea so we began asking around to see if others were interested in such a course.  We were amazed to find that lots of people were excited about the possibility of a Wiiliideh language class.

This winter, we helped to organize the recent Wiiliideh language class at Aurora College.  Over six weeks in January and February, Mary Rose taught 18 students some basic language and she introduced us to the culture from which the language flows. There was enough interest in the class to fill it several times over.

Our experience in New Zealand showed us that culture and language are inherently connected and that respect and relationship building is more achievable by learning the local language.  We look forward to continuing our learning and building on our local whanau.