Newcomers Learning on the Land 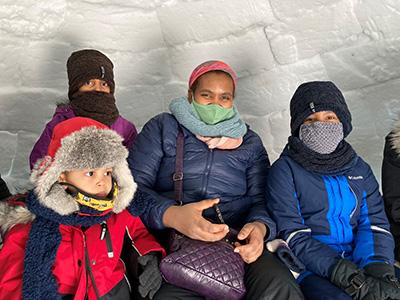 When I organize activities for new immigrants, I try to introduce them to uniquely northern experiences.  In late March, Narwal Outdoor Adventures did seven show-and-tell sessions on northern topics, including igloo building, northern animals, and harvesting furs, for almost 60 adults and children.  Here are some of the reflections from the immigrants who participated.

Duyen, who came from Vietnam six years ago, said, “I was amazed she (Cathy) did the igloo alone.  She was so strong and good.  She showed how she glued the ice when she heard a certain sound and she knew it was well bonded or not.  She showed me how to cut the snow blocks.  About the fur – I find the fur is beautiful, a bit scary to watch, but they also very extreme to create like so.”  Duyen is choosing to do activities now so her four-year-old son can learn and experience Canadian traditions and practices.

Juliet, a grandmother from Zimbabwe, told her daughter, “I feel more connected to this place and to Canada now.”  Her husband drew some similarities between trapping methods in the Northwest Territories and how he trapped animals a long time ago when he was growing up in rural Zimbabwe.

Mona said, “We learned a lot of stuff that are new and interesting, like building an igloo and hunting and skinning wild animals. Mohamed was amazed by all the traps they showed us and all the furs and wild animals he saw. Sara said the best part was cutting the snow blocks and putting them together to make the igloo.”

Rabia, from Pakistan, said, “Visiting the igloo was an amazing experience. The igloo was built by the owner herself and even though it was a cold and chilly afternoon the igloo seemed warm inside. There were various furs placed inside the igloo for sitting on, including muskox and caribou. The owner explained how she learned to build an igloo from an Inuit person.  She makes two to three igloos per year! Overall, it was a very informative kid-friendly session. Once it got too cold outside, we went inside and learned more about the furs including a large polar bear fur.”

Grayce, from the Philippines, found “It was a totally different experience from all others.  I have been living in the north for eight years.  The igloo was such a sight!  I have never seen a wolf in my whole life and seeing so many of them ready for skinning was surreal.  Hopefully, I will be able to do an actual trapping or ice fishing experience in the coming years to really experience northern culture.”

The lessons were perfect for hands-on learners, especially people learning English. All the participants appreciated the opportunity to learn these aspects of northern culture. It gives newcomers a greater sense of place in their new home.