A northerner’s life in five books 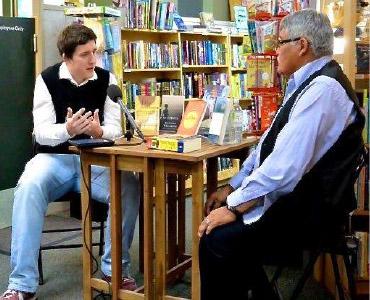 Guest blogger, Ollie Williams, started a new podcast series for two reasons:  to get to know interesting northerners, and to learn about books he might not know about otherwise.

Can you tell a northerner's life story in five books?

That's what we're setting out to do with From The Top, a new podcast series being recorded monthly at Yellowknife's Book Cellar. Northern personalities select five books that helped to shape their lives, then we explore the effect those books had while opening up those books to a new audience.  My partner in this effort is Miranda Bolstad, who works at the bookstore.

We have half an hour in which to do it - although, if you turn up to the live recording, you'll get a little longer and the chance to take part in a question and answer session at the end. And there are cookies! These are homemade cookies at that, with drinks, and the chance to browse the store after-hours. It's the coziest podcast you'll ever sit in on.

Episode one featured Paul Andrew, a legendary CBC North broadcaster and a former chief of Tulita, who got his radio break in Inuvik.  Paul used his five books to tell a story of residential schools, a fight against alcohol and a coming to terms with his place in the world.

With the help of For Joshua, by Ojibway author, Richard Wagamese, and Porcupines And China Dolls, by the late Robert Alexie — whom Paul knew well — our guest shared his youth and recovery from years in residential school. He used The Alchemist, by Paulo Coelho, to explain how he left his past behind and searched, like Coelho's shepherd boy, for his Personal Legend.

In closing, Paul selected two books by Holocaust survivors - Simon Wiesenthal and Elie Wiesel - to illustrate his gradual journey toward understanding of residential school and their impact. Paul recalled meeting Wiesenthal and being stunned by his tranquility and grace, given the horrors he had witnessed. From that, Paul began to appreciate how he could move on.

Paul even snuck in a sixth book  —  Nelson Mandela's Long Walk to Freedom — but you had to be in the room to hear his take on that. And of course, while he talked about his bonus selection, you got to sample a few extra cookies.

The first podcast can be found on iTunes or downloaded directly.  Follow us on Facebook to learn how you can be in the audience for our forthcoming second episode and how to listen to the next podcast.