Our talk is precious 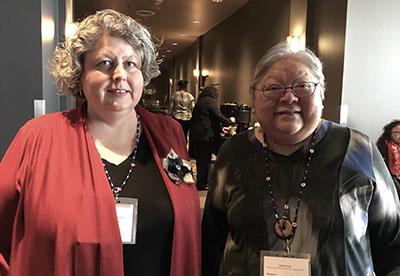 The keynote speaker at last week’s Indigenous Languages and Education Symposium urged her audience to help each other and work together to promote and revitalize Indigenous languages.

Dr. Lorna Wanasts’a7 Williams, of the University of Victoria, said the Northwest Territories is privileged to still have so many Indigenous language speakers. While colonization, including education, was used to dehumanize Indigenous people and break their ties to their land, wisdom, ceremonies, and ancestors, she suggested that education might be a powerful tool to rebuild language and culture.

She urged people to strive to normalize the ability to speak more than one language, and fight against the notion that English is convenient, superior, or the ‘universal’ language.

Dr. Williams said that language advocates should resist being pushed to standardize their language or choose one writing system. Dialects and differences within a language make sense and should not be seen as a problem.

She also suggested that language advocates be generous in situations where older people complain that people are not saying words properly; acknowledge that Elders feel a sense of responsibility about their language. She advised that language activities and revitalization efforts be as inclusive as possible—for instance involve learners who may no longer live in their home area.  She urged the use of mentorships, land-based activities, integrating school and community-based language learning, and creating as many contexts as possible to hear and speak Indigenous languages.

She advised that Indigenous language revitalization depends on creating different safe spaces and places where languages can be used in the community. She suggested language activists be flexible, use everyone’s expertise, and understand that language learning has always been an intergenerational activity. She noted that “our languages were born on the land, they are the voice of the land, and our relationship with the land, water and air.”