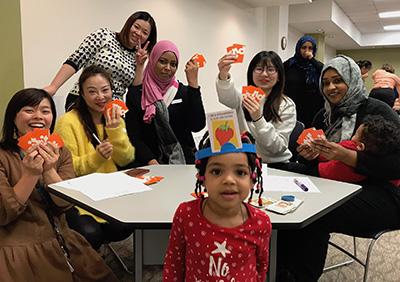 Recently, I spent a week visiting programs and attending a workshop that will help me improve the weekly Speak English Café events I organize at the Yellowknife Public Library. The goal of a conversation circle is to encourage English language learners to use English for tasks, to express ideas, and to voice opinions.

The most successful circles are relevant, engaging, and connected to the learners’ real-world needs and future goals. I visited organizations in Brooks and Medicine Hat, Alberta, shadowed a few of the staff, and participated in the workshop, ‘Tips and Tools for Successful Conversation Groups,’ in Okotoks.

I learned that conversation ideas don’t have to be new or complicated. For example, I could use Venn diagrams to generate conversations. A session with newcomers to Canada could use the topic,  ‘Foods I eat’. They could write or draw the foods in their home country in one circle and the foods in Canada in another circle. The overlapping part of the circles would be foods that are available in both countries.

Participants could make their own Venn diagram and then share and discuss it with a partner. Then two groups could show their diagrams to each other. I could challenge high-level learners to use comparative sentences when they explain their diagrams.

I learned that it’s key to teach and use question words. Who, what, where, when, why, and how are words that may need to be explained to English language learners. Again, the topics can be simple, like something that happened last week. One participant makes a statement and the other asks questions to clarify and gain a better understanding of the situation.

At the beginning of a program the focus may be on descriptive language, then later on activities that require different kinds of language. More complex activities require problem solving, some negotiation, or the use of persuasive language. An example might be asking groups to list the top 10 things a person should do in a job interview. The group would have to debate and decide on the items and the order in which to place them.

Conversation circles can be easily adapted to the participants and their interests.  The key is to get all participants speaking English!