An Australian up north by Leesa Myers 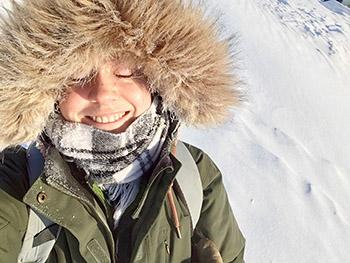 I was approved for a Canadian Working Visa in late 2019. I didn’t know anyone in Canada so didn’t have a destination in mind. I opened Google maps, scrolled towards the north and liked the sound of Yellowknife, so I booked a flight.

I was aware that there would be some major differences. Leaving an Australian summer to enter a Canadian winter was going to be interesting.

The first time I was asked what pop I would like when having lunch, I had no idea what they were referring to. My blank expression gave way to a smile when my server began to list all the available drinks.

The second incident involved a toque, or as I would normally call it a “beanie”. When I mentioned I couldn’t find a price on the beanie the attendant stared at me confused until I showed her the hat. I am also conscious that I likely pronounce toque incorrectly with my inability to soften the pronunciation of any vowel.

Back to the weather…

I was quite lucky in that for my first week here the weather was averaging -15. I thought I had acclimatized well until the -30s began. I left Australia just before Christmas when it was averaging +30 degrees each day. Now I have developed a habit of licking my teeth because they get cold from constantly returning people’s friendly smiles.

During a moment of naivety, or possibly stupidity, I went out hiking to the ice caves during my first -40 day. My phone died from the cold. My eye lashes froze over. But it was incredibly magical. I was gifted a lovely pair of mittens which have saved me during the extreme cold days (thanks Janet).

It has been quite the adventure with hopefully many more to come.

This sounds like an interesting trip and I hope we hear more from you!