Digital Stories On the Land 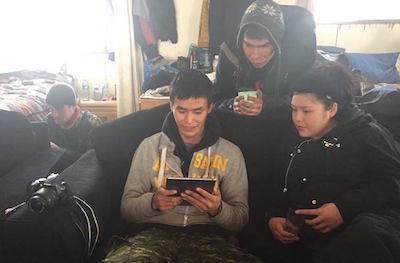 You wouldn’t think an on-the-land program — especially one promoting Dene ways of life  — would involve packing a suitcase full of iPads and digital cameras. But that’s the way it’s been for the first two Dene Ts'ı̨lı̨ (Dene Way of Life) School sessions in the Sahtú region.

Through digital stories, we learned that youth are navigating a complicated cross-cultural world. Digital storytelling helped the youth to describe some of their personal struggles, and at the same time highlight their positive visions for the future. While each story has its own character, they are filled with the great respect that the youth have for the elders and their knowledge, and their pride in who they are as Dene and Métis.

The 2017 Dene Ts'ı̨lı̨ School sessions were hosted by Benny and Tisha Doctor at Dǝocha, Sahtú Dǝ (Bennett Field, Bear River), in the Délı̨nę district. Our sponsors included the Ɂehdzo Got’ı̨nę Gots’ę́ Nákedı (Sahtú Renewable Resources Board) and Western Arctic Moving Pictures (WAMP). Many thanks to Jessie Curell and Pat Kane, for facilitating the digital storytelling, and to the NWT Literacy Council for providing equipment.

Stay tuned for the new Sahtú Youth Network website, which will feature the digital stories and more!  In the meantime, digital stories can be viewed on the Sahtú Wildlife Facebook page.

Thanks to guest blogger, Deborah Simmons, at the Sahtu Renewable Resources Board, for this Media Literacy Week blog about learning how to make digital content in a traditional Indigenous on-the-land context.